28 replies to this topic

Was running at HHR in Austin earlier this month when I heard a loud "pop" and my driver's side front wheel suddenly felt wrong... like I had suddenly corded or flattened the tire.  I limped into the pits and found a broken wheel stud.  I was considering upgrading to ARP wheel studs based on some earlier posts from Sharif and others, I guess my decision to do so is now made for me.

We noticed that the center nut securing the hub had actually come loose, and was being held on by the safety pin(!)  You can see in the pic how the nut is sitting flush against the pin.  This was only on the corner with the broken wheel stud.  Not sure if this is what caused the stud to break, or if the broken stud caused the nut to begin backing out.  Moral of the story - guys tracking your cars, check the torque on your hubs, and consider proactively upgrading your studs.

After removing the caliper and rotor, the hub assembly is secured by 4 bolts from the back.  First 2 pics below are of one of the rear hubs, the rest are of the front.

ARP stud on left (3 inches long), OEM in middle, broken OEM on right.  AFAIK, you can't get the ARP studs in a 1.25 pitch that are shorter than this.

Pressing the ARP studs into the hub assembly, then each secured with a small spot weld.

Mounted back on the car.

I need to add this to my "to do" list

Interesting findings.  Thanks for sharing.  I'd be interested in opinions on "chicken and egg" thoughts.  Were the nut and the stud related?  If so, which caused which?  I certainly don't know for sure, but am glad that there weren't any consequences to that failure.

I certainly think they're related, since the only loose nut was on the wheel with the broken stud.  I didn't notice any noise or vibration driving 200 highway miles on it (cautiously) after it broke, and I checked and rechecked the torque on my remaining 4 studs on my way home.
Not sure what caused it.  Did I forget to torque the nuts on that one wheel?  I don't think so, because I've been doing this a long, long time.  I can't rule it out though.  Others have said that the OEM studs are not up to sustained tracking.  I too am glad nothing more serious happened.
3 Jan 2011

Do you retorque on trackdays? If between sessions, lugs can retain A LOT of heat for several hours, and retorquing in 2-3 hours past a hard session can overtorque a lug when it cools down, and as it shrinks, the lug can pop off.

Your description of the event seems to the contrary, but if that was on the warmup lap or in the first one or two laps and you had torqued inbetween sessions, it's a possibility.
I do check torque a couple of times during a track day.  But I am careful to let the car cool down (an hour or more) and even then I back off the torque wrench a bit - really I'm just checking to see if anything has gotten loose.  If I have to re-tighten I do it at a slightly lower torque setting if the car hasn't had several hours of cooldown.
The stud broke at the end of my 5th session of the day.  And I noticed nothing funny during that session until it actually broke...  so I am thinking it was just failure of the stud, plain and simple.

27 Nov 2011
Almost every Nissan GT-R owner I know who has done more than 10 track days has broken at least one stud.  This has proven to be a weak point on the car.
28 Aug 2013
The ARP studs I use now are so hard that the lugs strip easily before ever damaging the studs.  I am using open-ended lugs and I've had 2 or 3 lugs begin to gall on the ARP studs, I just work them off and replace them, the studs are still A-OK.   I could feel the bad lugs getting progressively worse, from now on as soon as one feels sticky I'm going to throw it out and replace.
There is a tremendous amount of force and weight being applied at this point on the car.  Maybe the wheel is just pushing outward so hard as to gradually deform whatever is the weakest link.  So, my theory is, make sure your studs are stronger than your lugs and treat the lugs as a consumable item.
29 Aug 2013
I'm using the really long ARP ones that are 12x1.25.  I would probably just go with the shorter 12x1.5 if I had to do it again.
I torque to 95 ft/lbs, both track and street.  I am very careful to not torque between track sessions while they are still warm, but I do occassionally back the wrench off to 85 and just check to make sure none loosened.  They never have that I can recall but it's just a feel good thing for me I guess.
I've had 3 other track cars and none have ever stripped a lug even after many wheel changes.  Any theories on why the GT-R seems susceptible to this?

Are the spot welds really necessary?

No, just an extra step to ensure they don't spin.

Definitely one of the best things to do for hard-driven GT-Rs. Having my right front wheel roll off from three broken studs during an autocross session was not pleasant

27 Nov 2011
Almost every Nissan GT-R owner I know who has done more than 10 track days has broken at least one stud. This has proven to be a weak point on the car.


I am the only exception to this, but it is primarily because I took the advice of Icarus and Descartesfool and have replaced the entire set once. I plan in doing the whole set again over the next few years.

yikes!  I'm glad I am getting this down now!

7racer, looks-wise the ARP studs I had installed are pretty long.  Others have used the 1.5 pitch studs successfully, you can get those a bit shorter.

7racer, looks-wise the ARP studs I had installed are pretty long.  Others have used the 1.5 pitch studs successfully, you can get those a bit shorter.

ya I talked to the guys at TSM, they said the shorter ones had a different bore and took pictures.  So I decided to go with the longer ones.  Let me ask him again

Well, TSM will definitely know the scoop.  So go with their recommendation.

Bringing this back from the depths as I'm about to install nismo studs on the front. Do you need to have a press to install the studs? Or will a vice do the job perhaps?

Bringing this back from the depths as I'm about to install nismo studs on the front. Do you need to have a press to install the studs? Or will a vice do the job perhaps?

Never used a press on any of mine.  But it depends on how far the stud is threaded.  You can use an open ended nut to "pull" it into the hub.  Vise can do with the right sized jaws, but it takes a little jiggling.  Press is best, but both of the other methods work depending on how creative you are.

Thanks Shawn! Pulling it on is a good idea. I saw ourtoy mention just whacking it on with a hammer and punch, so between those two I think I'll work it out!

I used a stack of washers and lug nut to pull them in through. Lost three studs on Autoclub Speedway 4 years ago. Got lucky. Felt very mild shake and shut it down before taking the bank. 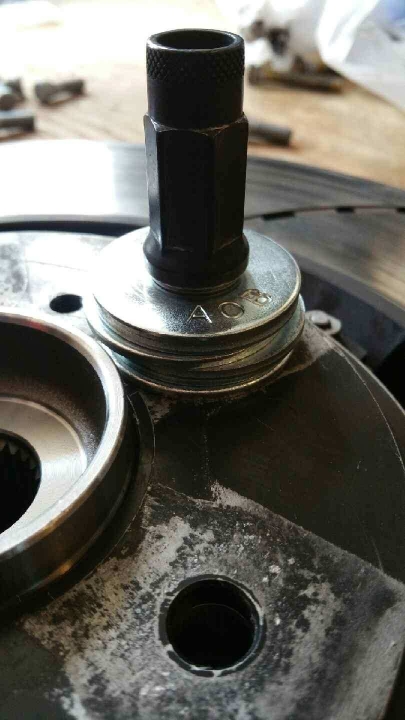 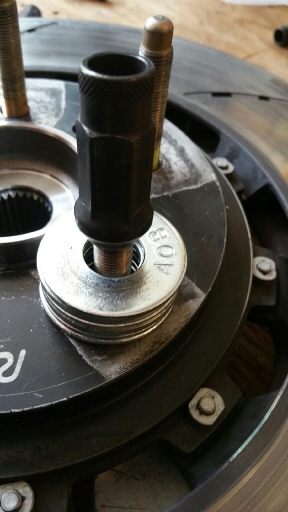 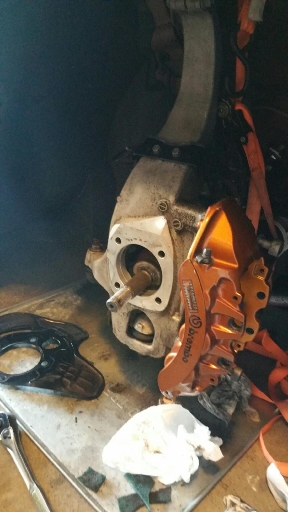 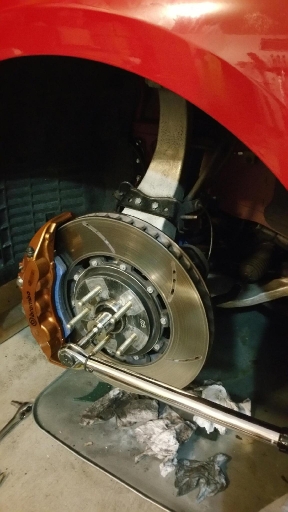 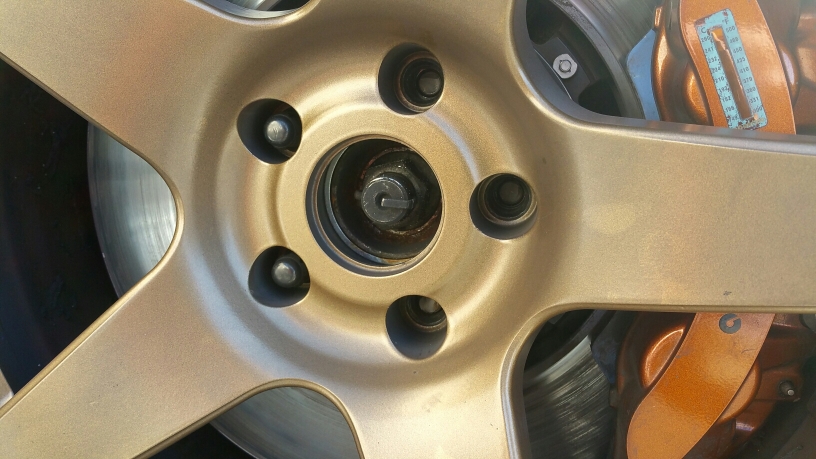 Wow. That is scary!! Smart move on your part there mate.

wow that is scary

Lucky, 150 mph on two studs. This was the push it hard session and was going fastest of the day, therefore later, harder breaking. I heard what I thought was a small stone hit the undercarriage coming out of turn 15. In the straight the wheel felt as though it was out of balance. Very mild. Slowed down heading into turn 1. It took me 15 minutes in the pit to recognize the problem. I was looking everywhere, then stepped back, my heart stopped. Prior, I had continued heating problems with the front brakes for a couple of yrs, that is why I had the temperature strip on the caliper. Heat cycles may have weakened an already weak part. Prior to this I did not know it was a weak area of the car. Recommend all shops suggest to the owner to change studs if they know the car is being tracked.

Also, if the car does not feel right on the track, get off.

Also, if the car does not feel right on the track, get off.


This is my main takeaway. Glad you are safe

Back to Maintenance & Repair